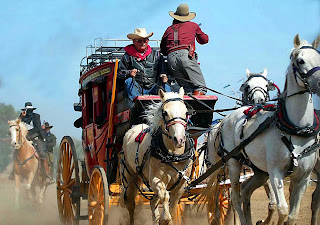 Riding shotgun, here the stage gunner tries to
get a shot at the would be robbers.

Traveling by stagecoach during the late 1800's was equivalent to traveling on tour buses in today's world. It was the latest transportation technology. Only trains had it beat. Stage coach travel also presented many dangers to drivers and passengers. This came in the form of accidents (crashes) and hold ups or robberies. Although infrequent, sometimes passengers were killed.

Unlike Hollywood versions of stagecoach robberies the real ones occurred on foot rather than horseback. Special planning was given to the best place to commit such a robbery. Robbers would pick a spot where the stage was moving slowly usually up hill. They would hide their horses a fair distance away in case there were gunshots not wanting to scare off their horses. Here they would step out from behind desert trees usually armed with shotguns instead of handguns and stop the stage, sometimes firing warning shots. Sometimes an obstacle would be placed in the road thus requiring the driver to get out of his seat and move it. 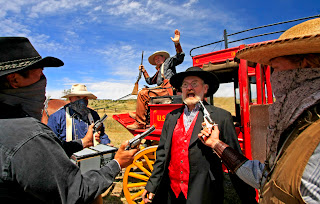 Everything of value was taken from passengers
during robberies.

During the holdup everything of value was taken from passengers, personal effects, mail express, but most sought after were the Wells Fargo funds. Sometimes robbers took the horses that pulled stages using them to ride away on. To help stop stage robberies Wells Fargo and company assigned their own investigators to track down robbers. They were quite successful at it. 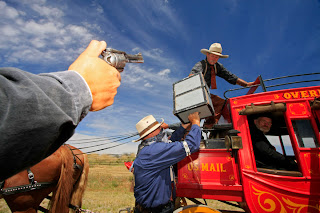 In my research of Arizona stage coach robberies one area was preferred by these bad men. Just north of Lake Pleasant above the ghost town of Gillette was a very popular location. More robberies were committed here then anywhere else in Arizona.

To be specific for those of you that are interested in this area...Lake Pleasant Park to Bumble Bee, along the Old Black Canyon Stage Road...this old 4x4 stage road can still be followed today. 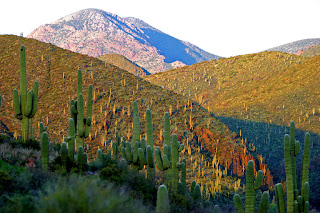 The area along the Black Canyon Stage Road.

One stagecoach robbery I researched at the Sharlot Hall Museum in Prescott, AZ, stated that three Mexicans on foot stopped the stage and suddenly began firing into the coach. On board was William Thomas a merchant of the now ghost town of Tip Top. After having been wounded several times, Thomas fell to the bottom of the coach and was attacked again by the robbers only this time with knives, severely cutting him. As they robbed the others Thomas tried to crawl away from coach into the desert but one of the robbers caught him and put a pistol to his head. Every one pleaded for him not to shoot. He didn't although Thomas later died from all his wounds. One of the robbers was later caught and hung for the crime. 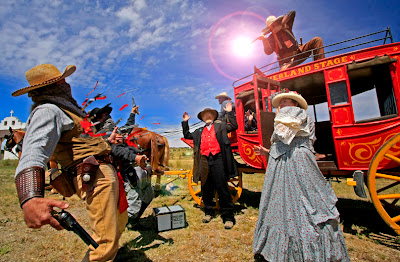 Because stage coach robberies became so prevalent
and violent in Arizona the Governor enacted a law
that robbers were worth more dead then alive.

The term "riding shotgun" comes from the second man who sat beside the stage driver armed with a double barrel shotgun loaded with buckshot. This gunman was an attempt by stage companies to stop robberies of their coaches. 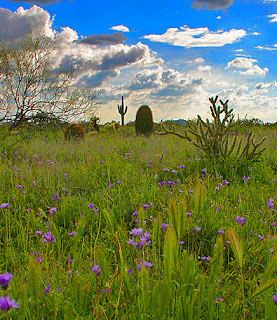 Stage robberies are a thing of the past now
and spring wild flowers grow silently along an old stage road.