To catch an ELK 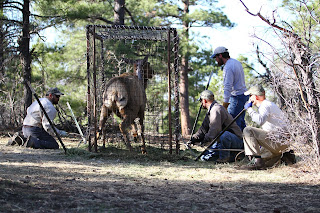 One of the interesting projects I work on each year with our department biologists is capturing collaring and tagging elk. Last week we were doing this. You might be asking yourself "are you crazy ... elk are big and dangerous. Well you would be right. When a big bull is caught we release it because of the possibility of being stabbed by antler. We only deal with cows and young bulls, but young bulls can be dangerous.

Elk grazing along highways.
The reason we capture live elk in AZ is for human safety. When an elk is hit by a automobile it can kill or seriously injure occupants within the auto and elk commonly cross roads. So after collaring and capturing these large creatures we track their movements for two years and develop patterns where their favorite and most common road crossings are. This aids in building crossing points over or under highways in the future thus making travel by auto, in elk country safer for elk and humans. Now you hunters are probably thinking that you would sure like to get your hands on this elk movement data. Sure would aid in hunting...huh? Sorry your out of luck.

Lariats are used to capture feet first.
The way we capture an elk is to set a big live trap similar to a trap you may rent from your local humane society.  By the way drugs are not used. We place a trap in a know elk area near a highway. For several months the area around the trap is baited with alfalfa. After the animals become use to the trap the alfalfa is next moved to the inside of the trap. An unaware elk walks into the trap ... trips a trap wire and bam... the door closes and now they are trapped. 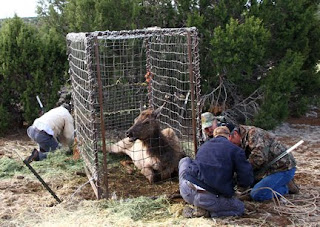 Photo by Chuck Dillion
Hey that me in the background.
We can then approach the trap use and use lariats to rope their feet and pull the elk to ground and tie off to T-posts. Pulling to the ground is the hard part as these big animals are strong! In the above photo I am in the background. At this point we open the cage and place a hood over their head to calm them down. 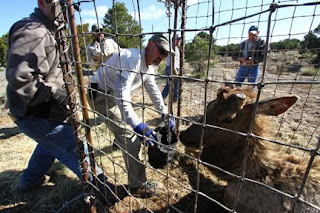 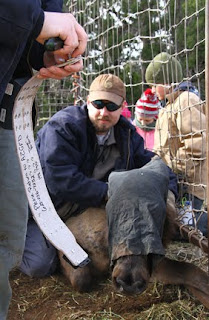 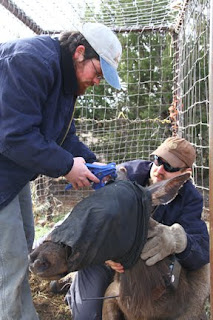 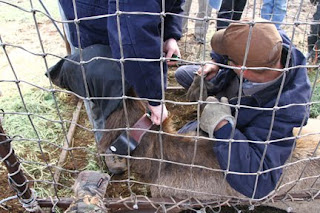 Next a radio collar is placed around the neck of the animal and a numbered ear tag placed in the animals ear like cattle ear tags. 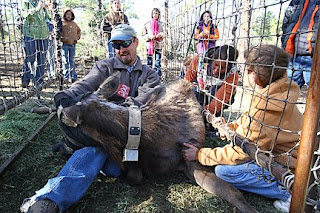 Sometimes school groups are invited and the whole ordeal is made into an educational activity. Once every thing is complete the animal is released to rejoin their group. 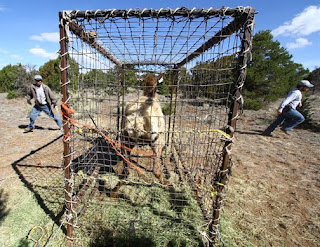 Here a young bull is released. Antler missing because of time of year.
At times young bulls have been known to come after us. 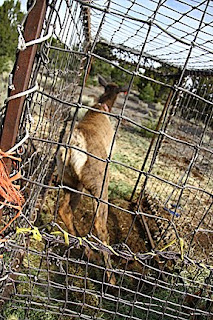 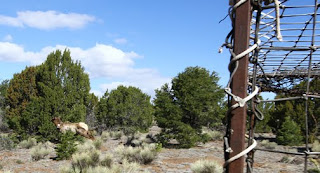 The elk is released with its now pretty jewelery...GPS necklace, ear piercing with a new earrings. No doubt they go back to their heard bragging and showing off their new jewelry. Collars are programed too fall off in two years. 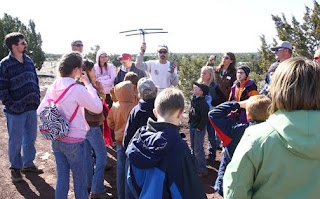 Airplane flights are scheduled every once in a while and we fly over the collared elk and upload the data. Some collars transmit data directly from the collar to a satellite and then to a laptop. Older technology collars need to be physically retained to gather the data and radio telemetry is used to locate these older pre-programed fall off dated collar. After they are found we download the information to a computer.
Let me know if you enjoy these types of stories and I will post more of my game warden work related stuff.


Shoot well and be safe.